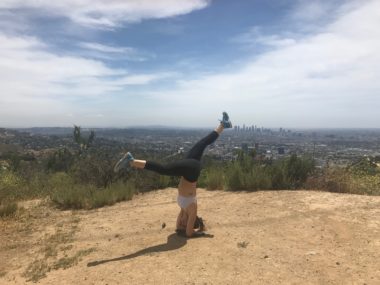 You know that quote about doing the same thing over and over again but expecting different results? Well Albert Einstein gifted us that pearl of wisdom, and he called it insanity.

I love that. What a beautiful way to define a word that very often has a negative connotation. Calling someone “insane” has all too commonly been associated with mental instability.

I’ve been thinking about routine a lot lately, particularly how it relates to working out and living a healthy lifestyle. Last month, I decided to partake in an abs challenge. I had a picture of said challenge saved in my phone for a long time (years, if I’m being completely honest) and for some unknown reason, just hadn’t started it. I finally discovered it again a month ago and decided there was no time like the present. For 30 days, I did what was spelled out for me and it was surprisingly really fun. I say surprisingly, because I’m not someone who enjoys at home workouts. I just prefer being in a gym or a studio to my living room.

I love working out. I’m a runner and a yogi. I spin, hike, lift weights, and am honestly open to trying anything. I took a trampoline class a few months ago. Not for me, but how else would I have known? Like many people though, I can easily get caught up in a routine and default to doing the same thing over and over. While it’s worth congratulating yourself for being active regardless of what it is that you’re doing, your body gets used to things with repetition and you’ll eventually stop seeing results if you’re not increasing resistance, reps, time, mileage or varying your workouts. If you’re not looking to see results and are just trying to be heart-healthy, then great, but really, who doesn’t want to see some fruits of their labor? Am I right or am I right?

If you’re changing up your workouts, why not take a stab in the kitchen too? True confession-I’m totally talking to myself here. Coming from someone who doesn’t have a huge (read: any) interest in cooking, I pretty much eat the same things every day. A smoothie for breakfast, a salad for lunch and an apple with peanut butter or a veggie burger for dinner. I know, I just rolled my eyes at me too. It’s not going to kill you if you aren’t the most adventurous eater, but it’ll most certainly bore you after awhile and probably trigger you to make some less than ideal choices when you’re in a bind.

So change things up every now and again. Do the thing that scares, or excites you. Routine is deadly. Actually, according to Einstein, it leads to insanity, which might be worse. Take a few risks. Feel new things. You’re a runner? Find a spinning class. Love yoga? Try crossfit. You’re a carnivore? Eat vegan for a day. The animals will thank you. Our bodies and minds aren’t static; we are living, breathing balls of energy, and if we try different things, our bodies will evolve with us. You’re much more resilient than you think.