It’s so much more rewarding to say hello and share a laugh with someone than to beat your last level of Candy Crush.

You know when you’re talking with someone and you zone out for 30 seconds and come back only because you’ve realized she’s stopped talking and you have to say something to acknowledge that you’ve been listening (which you haven’t) and now your only option is to nod, say “mm hm” and pray that you didn’t just call your friend fat or tell her to quit her job or get a divorce? Yeah. That’s the worst. It’s called not being present, and we could all use a lot of work on this, especially in this day and age where people snapchat while they’re on a date.

I live in NYC. I take the subway daily. Often, I look around and observe my fellow commuters, hoping to make eye contact with, or smile at, someone. What I’ve noticed more and more in recent years, is how rarely people actually look up when they’re on the train. It seems people would rather focus their attention on their phones than interact with another human being. I find this incredibly unfortunate, as human connection is such a basic need in life. It’s so much more rewarding to say hello and share a laugh with someone than to beat your last level of Candy Crush.

I’m not sure when it became such an endeavor to engage with other people. I want to say it was around the time that smart phones surfaced, but I know they’re not entirely to blame. Truth be told I think not being present is a bigger issue. It’s a choice that we actively make to disconnect in our daily lives. We are all so very busy. We pile more and more “stuff” on our plates because we think we need to fill every minute of the day with something. We don’t. Constantly multitasking, we’ve convinced ourselves that there’s just not enough time. There is. We text while we drive, email while we walk, and scroll Facebook while we eat. The problem with multitasking is that, as with most things, the more we practice it, the easier it becomes. 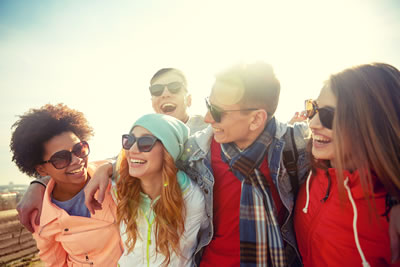 What would be the worst thing that would happen if we didn’t look at a text message while in the company of a friend? Or check for new emails at a red light or while working out? The text/email would still be there right? It might go unanswered for an hour, but for that hour we would have been in the moment and enjoyed time with a friend, driven safely, or had a great workout! We might have connected with another person, and fulfilled the basic need of human connection that smartphones simply can’t replace.

Have you ever been on a date with someone who checked his/her phone several times during your conversation? Have you been on a date with someone who didn’t? Who would you prefer to date? When we refrain from looking at our phones, we send a message to the person we’re with, that his/her time is more valuable than our screens, and that’s a pretty great feeling. The guy who chooses to make his date feel more important than his incoming email, will 9 times out of 10 get a second date, and that’s the goal, right?

I once read that you should put your phone down for an hour a day. Whether you silence it or turn it off is up to you, but you can’t touch it for an hour. I also suggest leaving your phone in your purse (or pocket) when you’re having dinner with a friend. Whatever you do, just remember that you never know whose day you might be making by simply saying hello. It’s the safe choice to avoid eye contact and go into zombie mode playing Sudoku. The alternative is so much more rewarding. As with everything else we practice, if we really work on staying in the moment, it’ll become second nature, and we’ll be able to truly connect with people and possibly form a lasting connection; and at the very least, we’ll know just how to respond to our friend when her story ends.